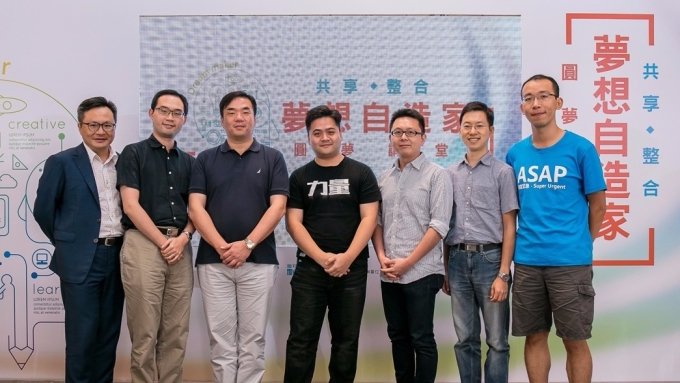 There is a global trend for Maker. Silicon Valley, Tel Aviv, Shenzhen and other places regard the makers as a main force of economic development. The government or large enterprises take the lead in setting up innovation centers and providing resources to incubate entrepreneurial dreams for the younger generation. Huang Hsiang Construction (2545-TW) also carries out the brand transformation this year in the form of “the Maker of the construction industry". It chose to launch a maker base community "Innovative New Heavens" in Tucheng and announced the “Smart Maker Project” to attract startups, using practical actions to support the development of startup industries.
In order to help the makers realize their dreams, Huang Hsiang held a “Fulfill your own dream lecture”. The event kicks off with the documentary "For more sun II", which help young people to always have courage and move towards their dreams. Then, Da-han Lin, the CEO of the well-known fundraising website Backer-founder, and Yi-zhang Pan, the COO of KPMG's innovation and new service team, gave their presentations as "maker coaches" to teach the startup teams on-site how to find funds.
Jia-xian Liao, the second generation management team of Huang Hsiang Construction, said that in recent years, the new entrepreneurship waves, from the industrial 4.0 revolution, the sharing economy, the internet, and the maker movement, have kept coming. The shared space and new life thinking that were born in response to the situation also made Huang Hsiang Construction think that the construction industry should also keep pace with the times. "We also want to be a maker in the corporate field." Therefore, Huang Hsiang Construction chose to launch the commercial and office building “NO1.Dreamers” in Tucheng, New Taipei City as a new milestone in their transformation.
Jia-xian Liao believes that Tucheng has a transportation network extending in all directions and industries such as manufacturing, textile, electronics, internet and other traditional and high-tech enterprises, so the upstream and downstream resources are abundant. For the startup businesses, Tucheng is the best city to implement ideas and build dreams.
"NO1. Dreamers" is expected to be completed in January 2020. Its base area is 4,300 pings, and it is understood that in order to create "NO1. Dreamers" as the expected maker base. Huang Hsiang Construction will integrate the trend of sharing and integration into the building. With the concept of the indoor space of Google headquarter that combines work and leisure, the small spaces will be fully utilized to create a community suitable for maker base.
Huang Hsiang Construction also supports the Makers to move in with practical actions, announcing the “Smart Maker Project” to provide 9 storefronts on the first floor for people who are interested in starting a business. It also provides entrepreneurial funds to entrepreneurs who have passed through the selection, encourages innovation, supports startups, and also creates an entrepreneurial ecosystem of industry interconnection, business opportunity sharing, and venture capital integration in the community.
The "Fulfill your own dream lecture" will be held at 1:30 pm on October 14th at the reception center of "Innovative New Heavens" (next to No. 281, Section 1, Zhonghua Road, Tucheng District, New Taipei City).
The municipal government actively promotes the environmental transformation around the MRT Yuanshan Station to integrate the lands of Taiwan Bank and Taipei City and provided public transportation and parking space. From the west side of MRT Yuanshan Station, if you go east, you can go to many Taipei City culture and leisure spots such as Yuanshan Park, Zhongshan Soccer Stadium, Taipei Fine Arts Museum, and City Museum. If you go west, you can go to the cultural assets such as the Temple of Confucius Historic District  sightseeing and regeneration planning area, thereby connecting "皇翔玉璽" and its nearby area to the well-known sightseeing spots.
In Taipei, the three major parks of Yuanshan Park, Art Park and Xinsheng Park were planned for the World Flora Exposition, namely the Yuanshan Park Special Zone and the Dajia Riverside Park Exhibition Area. The 91.8-hectare exhibition park is the largest greening construction in Taipei's history. The listed company Huang Hsiang Construction launches the large base construction case "皇翔玉璽" at this time would allow residents to immediately enjoy the advantages and more. It is nearby the MRT Yuanshan Station and surrounded by 110,000 ping Yuanshan Park and Dajia Riverside Park. In addition, there are street construction for the World Floral Exposition and the cultural stage of the museum, and it is also close to elementary and high school schools and Zhongshan Soccer Stadium, creating a rare living atmosphere in downtown Taipei. Whether it's from the aspect of landscape, MRT or public construction, it's the perfect place to buy.
"皇翔玉璽" is located on Chengde Road. The are units of 60 pings, 80 pings and 100 pings. The price is relatively reasonable compared with the high prices of projects in other areas